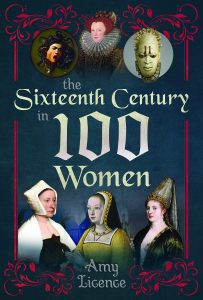 This wonderful book is like a 100-piece jigsaw puzzle, with each chapter building towards a picture of life for women in the sixteenth century.

The 100 women featured include Queens, Queen Consorts, noblewomen, ordinary women and nameless women who were captured in paintings and written records. They come from the United Kingdom, Europe and beyond. Through thorough research, the Amy Licence has included women who usually only feature on the fringes of court life.

In particular I was interested to learn more about the following women, amongst others. Honor Grenville, Lady Lisle, who tried to get her daughters accepted as ladies in waiting at the English court, Maria de Salinas who had accompanied Catherine of Aragon to England from Spain and Anne Seymour, Duchess of Somerset, who was imprisoned in the Tower after the downfall of her husband.

As the book moves from woman to woman and forward through the century, the links between some of these women become clear. What makes this book particularly fascinating is that as well as general information about each woman, Amy Licence offers a snapshot of their lives by focusing on a particular event.

We see Lady Jane Grey on the day she took possession of the Tower of London as Queen of England, Catherine of Aragon marry Prince Arthur at St Paul’s Cathedral, a group of women on a street in London, Margaret Tudor waiting for her husband to return from the Battle of Flodden and Mildred Cooke preparing for her wedding to William Cecil.

This is a must read to learn more about women in the sixteenth century.

Thank you to NetGalley and Pen and Sword Books for my review copy.

This entry was posted in Book Reviews and tagged Amy Licence, Book Reviews, Sixteenth Century in 100 Women. Bookmark the permalink.