Books 2019 – on sale today – Philippa of Hainault: Mother of the English Nation by Kathryn Warner 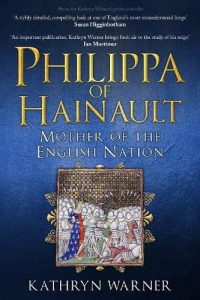 ‘Philippa of Hainault: Mother of the English Nation is the first full-length biography of the queen who stood in the middle of the some of the most dramatic events in English history.

Philippa’s marriage was arranged in order to provide ships and mercenaries for her mother-in-law to invade her father-in-law’s kingdom in 1326, yet it became one of the most successful royal marriages in English history and endured for more than four decades. The chronicler Jean Froissart described her as ‘The most gentle Queen, most liberal, and most courteous that ever was Queen in her days.’

Philippa stood by her husband’s side as he began a war against her uncle, Philip VI of France, and claimed his throne. She frequently accompanied him to Scotland, France and Flanders. She also acted as regent in 1346 when Edward was away from his kingdom at the time of a Scottish invasion, and appeared on horseback to rally the English army to victory.

Philippa became popular with the people due to her kindness and compassion, demonstrated when she sought pity for the Burghers of Calais and persuaded King Edward to spare their lives. This popularity helped maintain peace in England throughout Edward’s reign. Her son, later known as the Black Prince, became one of the greatest warriors of the Middle Ages.’

This entry was posted in Books 2019 and tagged Books 2019, Kathryn Warner, Philippa of Hainault. Bookmark the permalink.