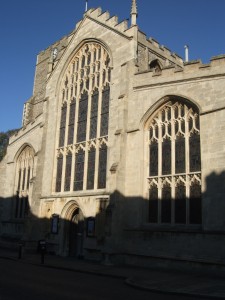 Mary died on 25th June 1533. After lying in state at Westhorpe for three weeks, she was buried in Bury Abbey.

According to the St Mary’s Church guide book, ‘at the dissolution of Bury Abbey in 1539 her tomb and body were transferred to the north side of the sanctuary of St. Mary’s. In September 1784 the tomb was dismantled, her lead coffin opened and her embalmed body revealed. Locks of her long golden hair were cut off, one of which can still be seen in the borough Museum. She was re-buried in the sanctuary and the original tomb top, a pre-reformation altar stone with five consecration crosses, placed over the grave. (1) * 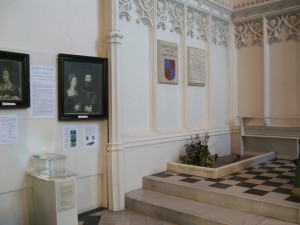 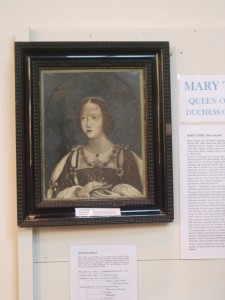 Close up of portrait of Mary Tudor 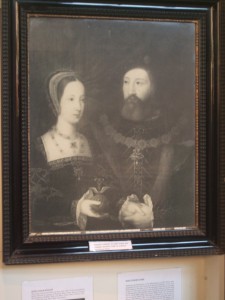 ‘…led by the young Marchioness of Dorset, who was chief mourner, with her brother, the eleven-year-old Earl of Lincoln, the family assembled for the solemn funeral. Lady Eleanor came after her brother and sister, accompanied by Lady Catherine Willoughby, Suffolk’s ward. Mary’s stepdaughters, Lady Powis and Lady Mounteagle, came next.

…The procession formed up in the courtyard. Six gentlemen lifted the coffin from the chapel, placing it on a carriage draped with black velvet and drawn by six horses trapped in black. A pall of black cloth of gold was placed over the coffin, upon which rested a beautiful funeral effigy of the late Queen in her robes of state, a golden crown on her head and a sceptre brought specially from France in her hand. In front of the coffin 100 poor men in black carried wax tapers. Immediately behind the young Marchioness, escorted by her husband, rode a palfrey accoutred in black velvet. Lord Clifford, who was to marry Lady Eleanor, rode beside them, while ten noblewomen who had served Mary at various times rode single file behind them. Next came two carriages with the Queen’s gentlewomen and lastly the yeomen and servants.

…It was two o’clock before the procession reached Bury St Edmund’s, where the abbot and monks received the mourners and the Bishop of London waited in full pontificals. A hearse had been prepared for the coffin, all hung with black drapes, fringed and embroidered in gold with Mary’s arms and her gentle motto, ‘La volonte de Dieu me suffit.’ Banners embroidered with the symbols of Lancaster and York, the Tudor portcullis and the fleur-de-lis, adorned the church from the gate of the monastery right up to the high altar. The monks began to chant the solemn dirge and the French herald cried out at proper intervals, ‘Pray for the soul of the right high and excellent Princess and right Christian Queen Mary, late French Queen, and for all Christian souls.’” (2) 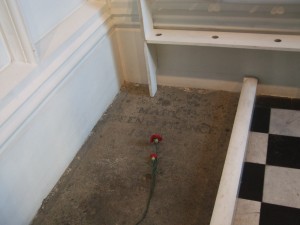 “Here lyete the Ryght noble and excellent prynces Mary frenche qwyne Suster to the moste myghtty prynce kyng Harry the viii of that name and wyff to Lews kyng of france whyche all hyr lyff tyme contynuynge pesyble qwyne dowager of france and in high favor and estymacion of bothe Reaulmes was afterward maryed to Charles duc of Suffolk.” (3) 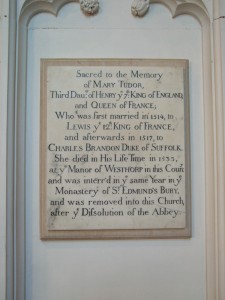 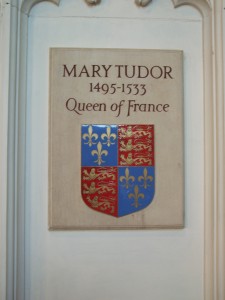 In the South Chapel is the Mary Tudor Window. According to the guide book, the window ‘is by Clayton and Bell and dates from 1881. It was presented by Queen Victoria in memory of Princess Mary Tudor, Queen of France and Duchess of Suffolk.’ (4) 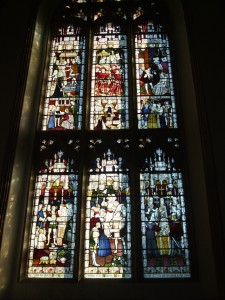 ‘In the upper tracery are depicted Mary Tudor, Henry VIII, Prince of Castile, Henry XII of France, and Charles Brandon Duke of Suffolk. The glass shows the main events in Mary’s life (1) marriage with Louis XII in October 1514, she aged 18, he aged 52; (2) the entry of Mary into Paris, in November 1514; (3) Mary as the ‘White Queen’ in her widowhood in January 1515, talking to Henry’s ambassador Charles Brandon; (4) her marriage to Charles Brandon in March 1515; (5) their reconciliation with Henry VIII in England in May 1515; (6) Mary’s funeral at Bury Abbey in 1533.’ (5) 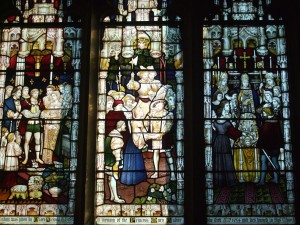 This entry was posted in Places, Tudor Related Places. Bookmark the permalink.