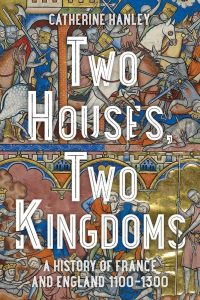 ‘An exhilarating, accessible chronicle of the ruling families of France and England, showing how two dynasties formed one extraordinary story

The twelfth and thirteenth centuries were a time of personal monarchy, when the close friendship or petty feuding between kings and queens could determine the course of history. The Capetians of France and the Angevins of England waged war, made peace, and intermarried. The lands under the control of the English king once reached to within a few miles of Paris, and those ruled by the French house, at their apogee, crossed the Channel and encompassed London itself.

In this lively, engaging history, Catherine Hanley traces the great clashes, and occasional friendships, of the two dynasties. Along the way, she emphasizes the fascinating and influential women of the houses—including Eleanor of Aquitaine and Blanche of Castille—and shows how personalities and familial bonds shaped the fate of two countries. This is a tale of two intertwined dynasties that shaped the present and the future of England and France, told through the stories of the people involved.