Books 2022 – on sale today – Blood, Fire and Gold: The story of Elizabeth I and Catherine de Medici by Estelle Paranque 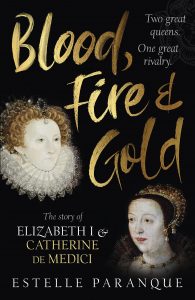 ‘In sixteenth-century Europe, two women came to hold all the power, against all the odds. They were Elizabeth I and Catherine de Medici.

One a Virgin Queen who ruled her kingdom alone, and the other a clandestine leader who used her children to shape the dynasties of Europe, much has been written about these iconic women. But nothing has been said of their complicated relationship: thirty years of friendship, competition and conflict that changed the face of Europe.

This is a story of two remarkable visionaries: a story of blood, fire and gold. It is also a tale of ceaseless calculation, of love and rivalry, of war and wisdom – and of female power in a male world. Shining new light on their legendary kingdoms Blood, Fire and Gold provides a new way of looking at two of history’s most powerful women, and how they shaped each other as profoundly as they shaped the course of history. Drawing on their letters and brand new research, Estelle Paranque writes an entirely new chapter in the well-worn story of the sixteenth century.’

This entry was posted in Books 2022 and tagged Blood, Books 2022, Estelle Paranque, Fire and Gold. Bookmark the permalink.