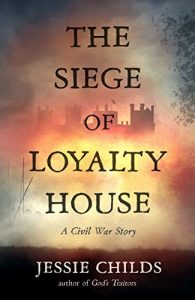 ‘A greater proportion of the British population died in the civil wars of the seventeenth century than in the world wars of the twentieth. Jessie Childs recovers the shock of this conflict by plunging us into one of its most extraordinary episodes: the siege of Basing House. To the parliamentarians, the royalist stronghold was the devil’s seat. Its defenders called it Loyalty House.

We follow artists, apothecaries, merchants and their families from the revolutionary streets of London to the Marquess of Winchester’s mist-shrouded mansion. Over two years, they are battered, bombarded, starved and gassed. From within they face smallpox, spies and mutiny. Their resistance becomes legendary, but in October 1645, Oliver Cromwell rolls in the heavy guns and they prepare for a last stand.

Drawing on unpublished manuscripts and the voices of dozens of men, women and children caught in the crossfire, Childs weaves a thrilling tale of war and peace, terror and faith, savagery and civilisation.

The Siege of Loyalty House is an immersive and electrifying account of a defining episode in a war that would turn Britain – and the world – upside down.’

This entry was posted in Books 2022 and tagged Books 2022, Jessie Childs, The Siege of Loyalty House. Bookmark the permalink.