Her latest book ‘Cecily Bonville-Grey – Marchioness of Dorset: From Riches to Royalty’ was published in February 2022. 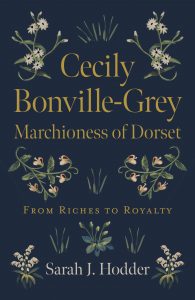 Cecily as a subject was actually a complete surprise to me. I have spent the last few years delving into the sisters and daughters of Elizabeth Woodville and have loved researching and ‘living’ the lives of these lesser-known women for a brief period of time. And of course along the way, Cecily’s name has cropped up several times as the wife of Thomas Grey, Elizabeth Woodville’s son from her first marriage to Sir John Grey. Although I write about women, Thomas has always held a bit of a fascination for me, especially during the episode after Edward IV’s death when he was accused of having a liaison with Jane Shore, one of the King’s mistresses ‘[the] late marquis of Dorset’ [who] ‘not having the fear of God, nor the salvation of his own soul, before his eyes, had damnably debauched and defiled many maids, widows, and wives, and lived in actual adultery with the wife of Shore’.

This led me to think about what it would have been like for his wife to experience this very public humiliation, and that’s when I began researching to see if I could find out who Cecily was. As I looked into her life, I was amazed at the number of connections she had to everyone else I knew of during this period – the mighty Neville family, William Hastings, the king’s chamberlain and of course even Lady Jane Grey. She turned from someone quite interesting into someone fascinating and I wanted to tell her story.

As far as I am aware, there is no book that focuses just on Cecily. Reasonably there are some who may say that this is because there is not a huge amount of information on her, but that’s sort of the direction my writing has taken and I love to pull together all the snippets that are available to create a picture of who my subjects were. Cecily is of course mentioned in the fabulous book The House of Grey by Melita Thomas which gives a hugely detailed insight into the Grey family as a whole and you will often see her pop up in other books, both fiction and non-fiction, which cover the Wars of the Roses or the Woodville/Grey family story.

Cecily was very well connected by birth and marriage. Which connection was most dangerous to her?

During the reign of Edward IV, Cecily was obviously riding high; as a young child she was a stepdaughter of the king’s chamberlain and then through her marriage to Thomas Grey, she became the daughter-in-law of the king and queen. But ultimately, she was probably the most in danger through her marriage to Thomas, especially during the reign of Richard III. When Richard claimed the throne, Thomas fled to France. Naturally, as the son of Edward’s queen who was now in hiding in sanctuary, Thomas was considered an enemy. He and the other Woodville supporters who wished to see Edward V on the throne were a threat to Richard and Cecily, as Thomas’ wife and clearly loyal to her family, was therefore no friend to the new king. Sadly, I could find no evidence as to her whereabouts during Richard’s reign, we can only assume that she kept her head down and remained on her estates keeping her children safe and hoping her husband would come home safely.

One of the biggest surprises when researching the book was actually a personal one. When I looked through a survey of Cecily’s West Country Manors from 1525, listed amongst the tenants was a William and Robert Hodder who leased a cottage from Cecily and also a John Hodder and his daughter Joan who had some land in a place called Barne in Dorset. Over the years I have managed to trace my own Hodder family back to Dorset but have only managed to reach the seventeenth century, so I have not yet been able to make any direct connection to William, Robert, John and Joan. But the part of me that loves history is enthralled that Cecily may have had a direct connection with members of my own past. Of course, the Hodders of Barne most likely never even met Cecily or Thomas personally, but those of you who love to make those fleeting connections in life will understand exactly where I am coming from and how excited I was to find this information!

Personal reasons aside, I think the biggest surprise researching Cecily’s life was exactly how much of her story I could piece together. When I began to search for material, I had prepared myself for the fact that I may have to give up (something I hate to do), because I wasn’t sure how much of her life would be irretrievable. But because of all her connections, I was able to follow her life story pretty much all the way through – she drops away here and there for short periods of time but discovering even little snippets like her trip to Calais as a young woman, which garnered a mentioned in the Paston letters, meant I could really see the fabric of her life, once I weaved all the little threads together.

Step-daughter in law to one monarch and great-grandmother to another, Cecily managed to survive the Wars of the Roses when many of her relatives didn’t. Why do you think this was?

She probably survived because she understood the order of things and her place amongst them. Her connections obviously helped her; she had money from an early age through her inheritance and she would never have wanted for anything. But I think both she and her husband were aware of the benefits of being close to the crown but also the dangers. When her family were in trouble, after Richard III’s usurpation and at certain times during the reign of Henry VII, when anyone with links to the House of York came under suspicion, they were always careful to retreat and to not outwardly appear a threat in any way.

Do you think Cecily would have supported her great-grand daughter’s ‘usurpation’ of the throne?

My answer to this can only be supposition, but I think given my opinion on why Cecily survived and thrived during her lifetime, I think the answer would have to be no. I imagine she would have counselled Jane against it; Cecily knew first-hand that if someone comes to power through usurpation, there will always be challengers ready to take you down. And only a strong leader with a large amount of support would be able to survive that. Jane, so young and with no experience of gaining and holding power, was really doomed from the start (although from what I have read about Jane Grey, her steely character at such a young age may have made her a great queen if she had pulled it off). But even if Cecily had been around to counsel Jane Grey, the power and the decisions that took her to the throne was, of course, always with the men around her and Cecily would have understood that too. The Grey family were never meant to rule; Cecily would have known that and at the very least I think she would have had a few stern words to say to her grandson, Henry Grey, Jane’s father, about the dangers that power can bring!