HistFest 2022 – The House of Dudley
Dr Joanne Paul discusses the Dudley family’s entanglement with the Tudor dynasty with Professor Kate Williams
At the British Library and also online
9th April
15:00-16:15 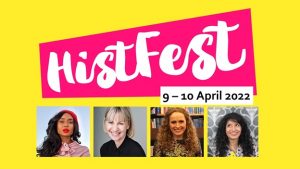 ‘Each Tudor monarch made their name with a Dudley by their side – or by crushing one beneath their feet. The Dudleys thrived at the court of Henry VII, but were sacrificed to the popularity of Henry VIII.

Rising to prominence in the reign of Edward VI, the Dudleys lost it all by advancing Jane Grey to the throne over Mary I. Under Elizabeth I, the family were once again at the centre of power and would do anything to remain there.

What was it that caused this family to keep rising so high and falling so low? Dr Joanne Paul discusses the history in her hotly-anticipated new book The House of Dudley.

This entry was posted in Talks and tagged HistFest 2022, Joanne Paul, Talks, The House of Dudley. Bookmark the permalink.