Another book to look forward to that features Jane!

Posted on 1st February 2022 by Tamise

31st March 2022 – The House of Dudley: A New History of Tudor England by Joanne Paul 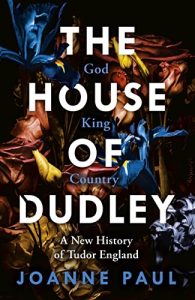 ‘Each Tudor monarch made their name with a Dudley by their side – or by crushing one beneath their feet. The Dudleys thrived at the court of Henry VII, but were sacrificed to the popularity of Henry VIII. Rising to prominence in the reign of Edward VI, the Dudleys lost it all by advancing Jane Grey to the throne over Mary I. Under Elizabeth I, the family were once again at the centre of power, and would do anything to remain there . . .

With three generations of felled favourites, what was it that caused this family to keep rising so high and falling so low? Here, for the first time, is the story of England’s Borgias, a noble house competing for proximity to the throne through cunning, adultery and sheer audacity, revealing some of the period’s most talented, intelligent and cunning individuals.

This entry was posted in Books 2022, Books that feature Jane and tagged Books 2022, Joanne Paul, The House of Dudley. Bookmark the permalink.