Too Close to Her Throne: The Other Cousins – Talk by Susan Doran 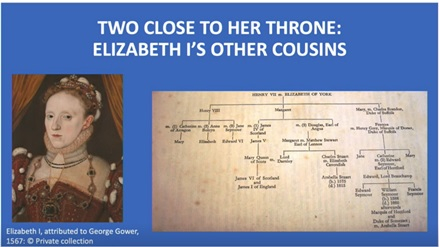 The Tudors were not very good at producing sons but they were good at producing daughters who lived beyond childhood. During her lifetime, Elizabeth had 9 female cousins on her father’s side. 3 of them, including Lady Jane Grey died before 1560 but 6 lived on to cause Elizabeth when Queen, considerable problems.

It is hardly surprising that Elizabeth’s relationships with her English royal cousins were often troubled. English history contained several precedents where ambitious members of a royal family emerged as rivals to the sovereign.

But an even more important issue affected the relationship of Elizabeth with her cousins; the unsettled succession. With a childless Queen on the throne, the descendants of Henry VIII’s two sisters were politically significant, being potential claimants on Elizabeth’s death and even possibly during her lifetime.

Apart from Mary Queen of Scots, and including Elizabeth herself, the cousins were not unimpeachably legitimate. The Earl of Angus had had a pre-contract before his marriage to Margaret Tudor.

Charles Brandon’s marriage to Mary Tudor had taken place while he was precontracted to someone else. Question mark remained even though the pre-contract was nullified.

There is one group who are not in the family tree. Another branch of the family of Mary and Charles Brandon, their daughter Eleanor who had a daughter, Margaret Clifford.

The closest male cousin to Elizabeth was Henry Hastings, 3rd Earl of Huntingdon. He was descended from George, Duke of Clarence. Although he was a very distant cousin, he had 2 advantages – he was male and staunchly protestant. He was married to Robert Dudley’s sister, Catherine, so could have relied on support from there if he had ambitions towards the throne but showed no inclination.

Henry VIII’s will complicated who should succeed Elizabeth. Henry had privileged the descendants of his sister Mary, over those of his sister Margaret, were his 3 children to die childless. The will also laid down that Mary and Elizabeth should inherit despite being illegitimate. Why did Henry disinherit the Scottish line? He didn’t want a Scot to sit on the English throne. Henry was trying to punish the Scots for resisting the marriage of Mary, Queen of Scots to Prince Edward.

When Elizabeth came to the throne, only Mary, Queen of Scots contested Elizabeth’s title on the grounds of Elizabeth being illegitimate. The other cousins may have had mixed feelings. They had been close to Queen Mary I and even given precedence over Elizabeth on occasion. Probably hoped that Elizabeth be disinherited but despite that they all accepted Elizabeth as sovereign.

Frances died soon after Elizabeth came to the throne. Important to remember that Frances had been behind Lady Jane Grey’s attempt to oust Mary and Elizabeth, when she had given her right to succeed to the throne to her daughter Jane.

Frances had begged Mary’s forgiveness due to family ties. Frances’ mother, Mary, had been close to Katherine of Aragon. After the execution of her husband, Frances had married her beneath her. Although Elizabeth had prejudice against the Grey line, she did pay for a royal funeral for Frances.

Katherine married Edward Seymour in secret and by August 1561 was pregnant. Elizabeth would never have agreed to a marriage between them. Might have been a problem if Katherine had had sons before Elizabeth had consolidated her hold on the throne.

Elizabeth was furious when she found out the marriage and pregnancy because both had denied being in a relationship and she also suspected a plot. Not necessarily to replace her on the throne but to secure Katherine a place in the succession.

Elizabeth was trying to reach amity with Mary, Queen of Scots, who had demanded that her place in the succession be acknowledged. If Elizabeth recognised Katherine’s marriage and child as legitimate, Katherine would have a lot of support and this would make the situation with Mary more difficult.

The marriage was declared void. At the investigation Katherine and Edward gave conflicting details, one of their witnesses had died and they could not find the priest who had performed the ceremony and it was difficult to improve they were married. Katherine and Edward were sent to the Tower of London, both ignored the ruling about their marriage and a second son was born. 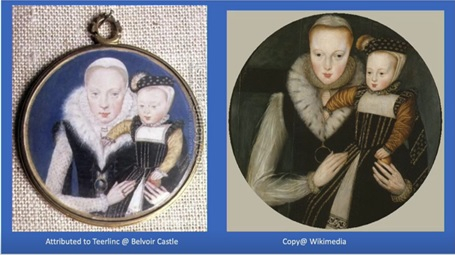 When Katherine died, she was given a royal funeral at the local parish church. During the reign of James I, her sons were legitimised and her grandson built a magnificent monument in Salisbury Cathedral in 1665. Katherine and Edward were buried there, showing that Katherine was accepted publicly as Edward’s wife.

Mary Grey underwent a secret marriage in 1565 with Thomas Keyes, the Queen’s Sergeant Porter. Mary had been born with a deformity and people did not think of her as a possible Queen.

Both were arrested and a list of questions were out to Mary about her marriage. Was it valid? What kind of ceremony? Was there a plot? The marriage had been consummated, so it was valid but this did not stop them being separated.

When Mary Grey died in 1578, Margaret Clifford became more important in the line of succession. Mary I had given Margaret precedence over Elizabeth. Margaret had split from her husband and Elizabeth treated her well, until Margaret began to meddle in politics. In 1579/80 Elizabeth was considering marriage with France but Margaret opposed the marriage, when she had been instructed not to. Margaret started to use an astrologer. He was arrested and said that Margaret had encouraged him to cast Elizabeth’s horoscope, to predict her death.

The lives of Elizabeth’s female cousins were as come called it, tragic. Don’t think Elizabeth’s attitude towards her cousins was spite or fear that they would overthrow her. It had a lot to do with Elizabeth wanting Mary, Queen of Scots to be her heir. Elizabeth believed in heredity monarchy.