A book that features Lady Jane to look forward to….

22 February 2022 – House of Tudor: A Grisly History by Mickey Mayhew 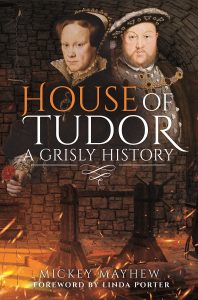 ‘Gruesome but not gratuitous, this decidedly darker take on the Tudors, from 1485 to 1603, covers some forty-five ‘events’ from the Tudor reign, taking in everything from the death of Richard III to the botched execution of Mary Queen of Scots, and a whole host of horrors in between. Particular attention is paid to the various gruesome ways in which the Tudors despatched their various villains and lawbreakers, from simple beheadings, to burnings and of course the dreaded hanging, drawing and quartering. Other chapters cover the various diseases prevalent during Tudor times, including the dreaded ‘Sweating Sickness’ – rather topical at the moment, unfortunately – as well as the cures for these sicknesses, some of which were considered worse than the actual disease itself. The day-to-day living conditions of the general populace are also examined, as well as various social taboos and the punishments that accompanied them, i.e. the stocks, as well as punishment by exile. Tudor England was not a nice place to live by 21st century standards, but the book will also serve to explain how it was still nevertheless a familiar home to our ancestors.

This entry was posted in Books 2022, Books that feature Jane and tagged House of Tudor: A Grisly History, Mickey Mayhew. Bookmark the permalink.