Last summer I visited Winchester Cathedral, where Mary I married Philip of Spain and the ruins of Wolvesey Castle, the old Bishop’s Palace (where their first meeting took place and their wedding feast was held). We had better weather than they did! 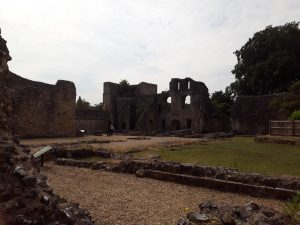 ‘…At about 10 in the evening, (Philip) made the short journey across the gardens to the bishop’s palace, for his first meeting with Mary Tudor.’ (1) 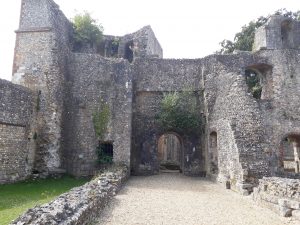 ‘As he came up the private stairs, she was waiting at the top to greet him, supported by her leading councillors and ladies-in-waiting.’ (2) 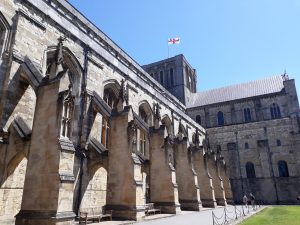 ‘The wedding of Mary and Philip took place on 25 July, the feast day of St James, the patron saint of Spain. This compliment to the groom was not matched by any improvement in the weather. Mary was married in the rain. But in all other respects the wedding was one of the most magnificent in English history.’ (3) 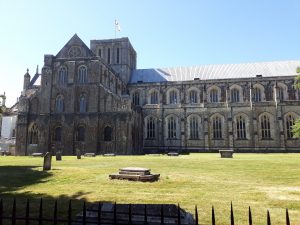 ‘Its setting, in the beautiful cathedral begun in 1079, was partly dictated by security fears and the danger of epidemics in central London. Winchester was also chosen because it was the bishopric of Stephen Gardiner, who performed the ceremony in the continued absence of a Catholic archbishop of Canterbury.’ (4) 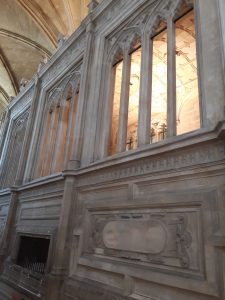 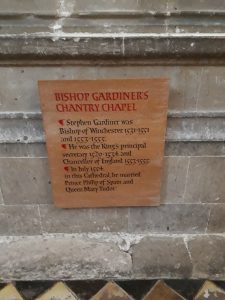 ‘The cathedral itself was richly hanged with arras and cloth of gold, and in the midst of the church, from the west door unto the rood, was a scaffold erected of timber…’ (5) ‘Entering the cathedral by the west door, Mary ascended the steps to the dais where her bridegroom was waiting.’ (6) 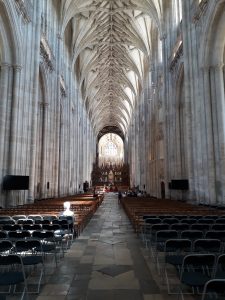 ‘The ring was placed upon the Bible to be blessed and Philip, in accordance with custom, added three handfuls of fine gold. Lady Margaret Clifford, the queen’s 14-year-old cousin and chief attendant, opened Mary’s purse, ‘and the queen smilingly put up in the same purse…Now joined as man and wife, Philip and Mary returned hand in hand to their places on the raised dais as trumpets sounded.’ (7) 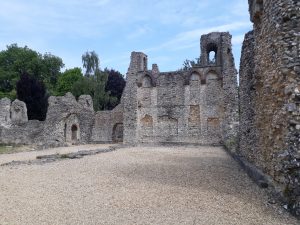 ‘The couple proceeded on foot to the bishop’s palace, where the finest of wedding receptions was prepared for them. There they ‘dined most sumptuously together’ under the cloth of state, just the two of them at their table, while music played.’ (8)