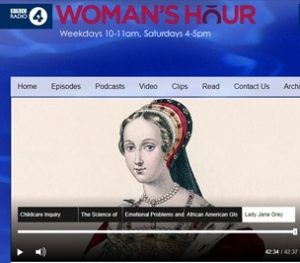 You can listen at Woman’s Hour.

The main points of the discussion between Jenni and Helen were:

Jenni – Why did you become intrigued by Jane Grey?

Helen – I think this moment in July 1553 is fascinating. England had never had a woman sitting on the throne. There had been a claim to the throne back in the twelfth century by Matilda, the daughter of Henry I but her attempt to make that claim stick had resulted in 19 years of civil war.

Henry VIII was so convinced that women couldn’t rule that he had moved heaven and earth, almost literally in his search for a male heir. So to have the end of that story be this moment when there are only women left on the Tudor family tree and the fact that in these dramatic days in 1553, it is not Henry’s daughters, Mary or Elizabeth who step forward to have the crown placed on their head. It’s this cousin, of whom so few people had really heard outside the corridors of Westminster, that the proclamation of her accession had to go on for about 45 minutes.

Jenni – We generally think of her as a young innocent, bullied and manipulated by powerful men. What was she really like, because she was very highly educated?

Helen – She was. I think we have to say that the caricature, the stereotype doesn’t come out of nowhere. The plan to put her on the throne was not her plan. It was not one she knew about before it happened. So in that sense she was a pawn being moved around a chess board but she wasn’t a passive figure. She had a ferocious brain, a ferocious intellect and also a ferocious religious faith to match Edward VI’s own, that was what they shared, a belief in the godly reformation that Edward had been instituting.

Jenni – So why had Edward named her? It seems clear from papers at the time that he didn’t believe a woman could rule either?

Helen – Edward’s plan, so far as we can tell, is this extraordinary document, called ‘My Devise for the Succession’, in which he sets out his plan for what should happen after his death. Obviously Edward hoped that he would have sons of his own, but he wanted Protestant kings to succeed him and this was a powerful strain in Protestant thought, the idea that man was the head of woman, as St Paul said and as John Knox would later write, that the monstrous regiment of women should be resisted. But when it became clear that Edward was fatally ill and he didn’t have any male heirs immediately at hand to succeed him, I think Jane Grey presented herself as someone who shared his fierce faith in the reformed Protestant church and someone who could be folded within a continuation of his own regime. She had just been married to the son of his chief minister, the Duke of Northumberland, it was a way of allowing Edward’s regime to continue from beyond the grave.

Jenni – What happened to reverse her fortunes and bring Mary Tudor to the throne?

Helen – It turned out that what seemed logical and seemed possible from within the corridors of power at Westminster, simply wouldn’t play in the country more widely. Edward’s subjects knew that his father Henry VIII had 3 children, Edward and his half-sisters, Mary and Elizabeth. Now, their legal status had been in doubt for years…Henry had annulled his marriages to their mothers and declared them to be illegitimate but he’d also declared them in statute law to be his heirs. And the idea that this cousin should be plucked from nowhere, conveniently married to the son of the Duke of Northumberland, who was not a popular figure as Edward’s chief minister, caused consternation. Mary raised her flag, raised her claim very bravely, no one among the political elite really rated her chances at the beginning, even her own allies and supporters. Nevertheless she staked her claim and people rallied to her cause and support ebbed away from the fledgling regime under Queen Jane with remarkable speed.

Jenni – Mary was reluctant to behead Jane. Why did she sanction it in the end?

Helen – Mary was very reluctant to behead Jane in the immediate aftermath of this attempted coup. When Mary took the throne, she was keen to blame everything on Northumberland, who was executed. Mary was then trying to rally the country to unite under her own sovereignty and Jane was found guilty of high treason but was left in the Tower.

Months later though in February 1554 there was a Protestant rebellion against Mary, led by Sir Thomas Wyatt. Not clear exactly what Wyatt’s rebellion was attempting to achieve, perhaps to put Elizabeth on the throne? But to have Jane Grey there, as someone who had worn the crown however briefly, seemed at that point to be too dangerous a situation to continue and Jane was collateral damage really.

Jenni – What did Elizabeth learn from Jane’s experience?

Jenni – I had always been a great admirer of Elizabeth I, until I discovered how she treated Jane’s sisters.

This entry was posted in Radio and tagged Helen Castor, Radio, Woman's Hour. Bookmark the permalink.