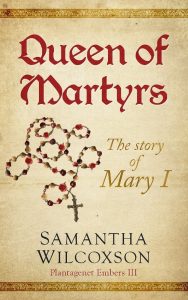 Thank you to Samantha for this guest article about the relationship between Queen Mary and Lady Jane and also for this extract.

The relationship between Queen Mary and her cousin, Lady Jane Grey, is a complicated one. As reluctantly as Jane may have taken the crown that was legally Mary’s, accept it she did. Once done, Jane’s hesitation disappeared and was replaced with the dedication to ruling that one would expect from this studious young woman. Well, we would expect it of her. Her new father-in-law, John Dudley, was likely a bit disappointed with the independence expressed by the teenager whom he had hoped to control as successfully as he had her cousin, Edward VI.

Far from the naïve pawn she is sometimes portrayed as, Jane would have known exactly what risks were involved in claiming the throne of England. While Edward VI had indicated his desire for Jane to succeed him in his will, it had not yet been made Parliamentary law, which favored Lady Mary. As a young woman whose intellect had already brought her to the attention of several famous scholars, Jane would have had no illusions regarding where her actions might lead.

Perhaps Jane did not see Mary as any greater of a threat than the Duke of Northumberland did. Mary had not shown the strength of character demonstrated by her mother up to this point. She clung to her old religion within her household, but she did nothing further to challenge her brother’s authority. It was probably easy for the Greys and Dudleys to convince themselves that Mary would quietly, if unhappily, accept that her place in the succession had been usurped. They could not have been more wrong.

Mary had accepted the rule of her brother, though some had considered her claim stronger than his. However, Jane’s situation was entirely different. A devout Protestant and more distant relation to Mary’s father, Henry VIII, Jane was not viewed as the rightful heir by Mary or most Englishmen, many of whom knew nothing about the woman they were informed had been declared queen. When Mary decided to make her move against Jane, she did it with greater confidence and success than she had any previous undertaking.

Jane’s star fell quickly and completely. So many declared for Mary that bloodshed was scarcely required to bring down the attempted usurpation. Then came the difficult task of moving forward.

Mary did not wish to execute Jane. Though people of our modern age are told she was ‘Bloody Mary,’ that sobriquet came long after Mary’s death. Men of her council found her merciful to a fault, and one of the traitors she wished to pardon was her young cousin.

Jane and her husband, Guildford Dudley, were not brought to trial until four months after their attempt to claim the crown. Even this was nothing more than a delay tactic on Mary’s part. She hoped that going through with the trial would satisfy the calls for justice against the young couple, leaving her free to eventually grant them their freedom. In one ill-advised attempt to understate the threat of Jane’s royal blood, Mary suggested that the girl’s parents, Frances Brandon and Henry Grey, had an invalid marriage due to a precontract. Neither the trial nor attempt at putting Jane’s legitimacy in doubt had the desired effect.

Unfortunately for Mary, Jane and her father seemed less concerned with extending Jane’s life than Mary was. While Jane countered and refused attempts to convert her to Catholicism by the chaplain Mary sent to advise her, Henry Grey took up with rebels once again. Mary was able to issue pardons to over 400 soldiers of Wyatt’s rebellion, but Henry Grey was not one of them. With the Spanish whispering in Mary’s ear that Prince Philip could not come to fulfill the marriage treaty with such a traitor in their midst, the Lady Elizabeth’s loyalty in doubt, and pressures building from all sides, Mary signed Jane’s death warrant.

Could it have happened differently? Jane made clear, even when imprisoned under the sentence of death, that she would never set aside her faith. She was as adamant that the new faith was true as Mary was regarding the old. Unless she was given the opportunity to leave England, it is easy to envision an alternate course of events where Jane Grey goes to the stake as a heretic rather than the block as a traitor. Either way, one could say that England was not big enough for these two queens.

I was somewhat disappointed that writing Queen of Martyrs did not offer greater opportunities to explore the relationship between Mary and Jane. Therefore, I made the most of one event that they did share, a Christmas at the Grey estate at Tilty. This scene takes place after an evening of Christmas festivities shared by Mary with the Grey family.

Once her morning devotions were complete, Mary set out to find Jane.

It was not difficult to locate her. The hall, where the constantly burning yule log kept the temperature warm and inviting, was where the family naturally gathered. Jane sat close to the hearth, hunched over a book that was tilted to catch the firelight.

A pang in Mary’s chest caught her unaware. Her old anger toward her father was suddenly inflamed as she realized that she should have her own studious daughters reading before the fire and a husband who doted over their children. Frances enjoyed the life that Mary’s father had refused her, and her brother would do no different as long as she disobeyed him.

Jane seemed to sense that she was being observed, because she turned her head and reluctantly closed the book in her lap. Seeing who it was, she rose from the chair and lowered into a curtsey in one fluid motion.

Mary rushed to her side. “Please,” she said, raising her up. “Do not hold to formalities during this visit. I only wish to enjoy time with family, though you honor me greatly.”

“Very well,” Jane said without emotion as she retook her seat and gestured to another, which Mary settled into.

Now that she was here alone with the girl, Mary felt oddly intimidated. Jane was so self-assured and their time together with Kateryn felt rather far away. She searched her mind for small talk that could lead to their shared memories, but everything felt awkward.

“Did you wish to hear of Kateryn?” Jane asked.

Mary’s eyes widened. “How did you know?”

Jane gave her a questioning look. “Whatever else would you wish to ask of me?”

Mary had not thought about it quite that way, and she felt guilty that her selfish motives were that obvious. She was stammering over an apology when Jane interjected.

“I beg you to accept my apology,” Jane pleaded in a softer tone. “My mother often chides me for my lack of tact.”

Offering a weak smile, Mary reached into the purse at her girdle. “I do wish to speak to you of my step-mother, but I also have a gift for you.”

Interest lit Jane’s eyes as she followed Mary’s hand. A string of shimmering pearls and rubies that sparkled like new ice was drawn from the pouch. The glittering light was reflected in Jane’s eyes as Mary presented her offering.

“Your grace,” Jane said in a hushed voice. “You are too kind.”

When Jane took the necklace, Mary realized that the piece appeared gaudy in the younger woman’s hand. She had failed to take into account Jane’s greater youth and simplicity. The necklace that so beautifully complemented many of Mary’s dresses, would look out of place in Jane’s wardrobe.

Jane either did not notice or was a good actress, for she thanked Mary profusely as she examined the gems, holding them up to catch the light. Mary smiled, deciding that maybe the young woman would like the piece and just had not had the opportunity to dress more opulently.

When Jane had tucked the gift away, she delved directly into the topic that she knew Mary longed to hear of.

“I was with Queen Kateryn at Sudeley,” she began, her eyes searching the fire for images of her memories. “She was like a second mother to me, caring for me even after you and your sister had gone.”

Mary noted Jane’s failure to keep the venom from her words at the mention of Elizabeth but remained silent.

“I was so pleased to attend to Kateryn at her happiest moment,” Jane whispered. “But it was God’s will that it be quickly followed by her last.”

Tears began to fill Mary’s eyes, and she was once again overwhelmed with regret that she had not been there. Demonstrating her eerie prescience, Jane continued.

“She understood why you were not there and loved you dearly until the end. That is why she named the baby for you.”

“If only her daughter had lived,” Mary whispered. She would have loved to raise the little girl as her own, but the guardianship had been given to Jane’s grandmother. Unfortunately, the babe had fallen victim to an early illness, the way so many did.

“Is it odd for me to say that I was proud to be chief mourner at her funeral?” Jane asked candidly. Her face crinkled in thought, and she described the black swathed chapel and carved coats of arms to Mary. “There was one for each of her husbands,” she said. “Including your father’s.”

Mary nodded as she wiped away an escaping tear.

“She enjoyed those last months at Sudeley. The setting and weather was idyllic. She and Thomas had smoothed over their disagreements for the sake of the unborn babe.” After a pause, Jane asked, “Do you think it is better that God takes us during a happy time, though the grieving for those left behind is made more poignant? If he takes one during the valleys of life, does it not leave us with only sadness to look back upon?”

Frowning, Mary thought on this. Was there a better time to lose a loved one? “It always hurts,” she said, thinking of her mother, who was abandoned and destitute when she died, “but I think you may be right. It gives me comfort to imagine Kateryn smiling as she strolled through fragrant gardens with her hand resting upon her swollen belly.”

Jane smiled. “Yes, and perhaps it should be a comfort then that she was quickly reunited with her daughter.”

Mary examined Jane and reminded herself that she was but fourteen. “You are a very wise young woman,” she said. “It is difficult for even the most devout to focus on the eternal, yet you, for all your youth, seem to have a strong grasp upon it.”

Most girls would have lowered their head in self-deprecation and blushed at such praise, but Jane received it in silence with a hint of a smile and gentle tilt of her head.

“I am eager to see what future God has planned for you,” Mary said before they settled into companionable silence before the cozy fire.

Other stops on the Queen of Martyrs blog tour.

Buy ‘Queen of Martyrs’ and the other books in the Plantagenet Embers trilogy.

Samantha Wilcoxson is the author of the Plantagenet Embers Trilogy. An incurable bibliophile and sufferer of wanderlust, she lives in Michigan with her husband and three teenagers. 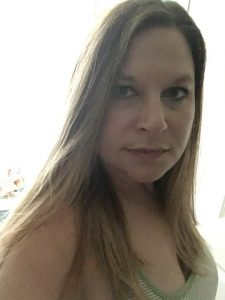