27th October 2016 – Mary I: The Daughter of Time by John Edwards (Penguin Monarchs) 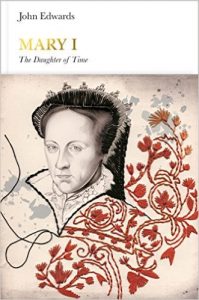 ‘The elder daughter of Henry VIII, Mary I (1553-58) became England’s ruler on the unexpected death of her brother Edward VI. Her short reign is one of the great potential turning points in the country’s history. As a convinced Catholic and the wife of Philip II, king of Spain and the most powerful of all European monarchs, Mary could have completely changed her country’s orbit, making it a province of the Habsburg Empire and obedient again to Rome.

These extraordinary possibilities are fully dramatized in John Edward’s superb short biography. The real Mary I has almost disappeared under the great mass of Protestant propaganda that buried her reputation during her younger sister, Elizabeth I’s reign. But what if she had succeeded?’