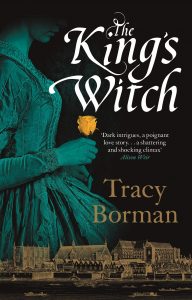 The King’s Witch by Tracy Borman is a superb tale of witchcraft, betrayal and treason at the Stuart Court. Although in the last days of the Tudor monarchy, Frances Gorges helped tend to the dying Elizabeth I, her skills are not welcomed by the new monarch James I.

Summoned to court as an attendant to Princess Elizabeth, Frances finds herself caught up in the hysteria against witches, her uncle’s ambitious plans and a plot that threatens the throne.

With characterizations that leap off the page and settings so real that you can almost smell the herb gardens and wood smoke; this is an enthralling read that I did not want to end. 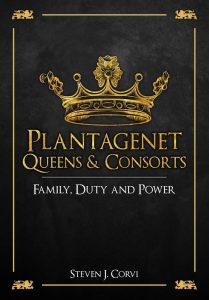 Plantagenet Queens lived in the shadow of the role created by Eleanor of Aquitaine. Steven J Corvi’s book includes some of the women who followed Eleanor in wearing the Plantagenet crown but also two who were not queen consorts.

Not every Plantagenet Queen is included in this study, which is a shame, as the greatest strength of this book for me, is how each woman built on the role of her predecessors, how they compared and what they individually brought to their queenship. I found this aspect of the book to be fascinating and it is a pity that there are gaps.

For the missing queens, it would have been interesting to see (even if their queenships were traditional and did not differ greatly), what they individually brought to the role and the challenges they faced. This would then have completed the comparison of how the role of royal consort developed over the centuries.

Thank you to Amberley Publishing for my review copy. 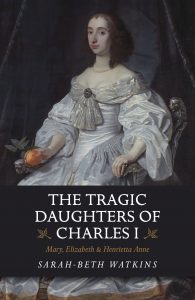 Sarah-Beth Watkin’s new book focuses on the three surviving daughters of King Charles I and Queen Henrietta Maria. Their two other daughters (Anne and Catherine) died young. While the stories of the future Charles II and James II are well-known, this book goes someway to putting their sisters in the spotlight.

The events of the Civil War meant that the Princesses Mary, Elizabeth and Henrietta-Anne lived very different lives. Mary, the eldest daughter, married Prince William II of Orange, which was partly to help fund her father’s campaign. Elizabeth spent most of the war in the hands of the parliamentarians. Along with her brother Henry, she famously saw her father on the day before his execution to say goodbye. Henrietta-Anne was born during the war itself, and had to be smuggled out of England by her governess, to join her mother in France and later married into the French Royal family.

As with Watkin’s previous books, this is a fast-paced, fascinating look at the lives of her subjects. Although all three sisters died before reaching 30, Watkins shows how their fortunes were linked to the status of their brother and fell and rose accordingly. It is a great starting point for anyone wanting to find out more about these Stuart Princesses. 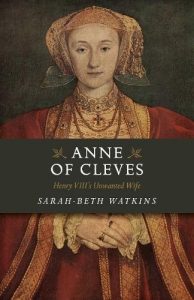 The story of Anne of Cleves, the fourth of Henry VIII’s sixth wives, has been overlooked in favour of his more well-known spouses. Anne is remembered as the wife Henry did not want to marry and soon rejected. Watkin’s biography is an interesting and fast-paced look at the life of the woman who was married to Henry for less time than his other Queens but outlived his later wives and survived to see two of her step children rule.

Mentions of Anne in books about the much married King, tend to concentrate on her brief time as Queen of England. Here, Watkins delves into Anne’s upbringing in Germany which helps to explain just how unprepared she was for life at the English court. What is particularly fascinating is what happened to Anne after the divorce, how she adapted to life as the ‘King’s Sister’ and weathered the turbulent reigns that followed.

For those wanting to learn about the fourth wife of Henry VIII, this is an excellent place to start. 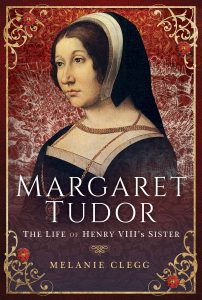 This is a highly readable account of the life of the Tudor Princess who became Queen of Scotland, Margaret Tudor. Often overlooked in favour of her famous brother Henry VIII, Clegg brings Margaret vividly to life as we follow her from pampered princess, through her successful reign as Scotland’s Queen consort and then her struggles as Queen Dowager.

As her granddaughter (Mary, Queen of Scots) found to her cost, balancing the demands of the Scottish factions was a difficult task and Margaret did not make it any easier with her later marriage choices. Margaret showed the same iron will as her Tudor siblings but was often caught between her brother and her adopted country.

Although Henry VIII overlooked Margaret’s descendants in favour of those of his younger sister Mary, it was Margaret’s great grandson who inherited the throne of England when the Tudor line died out. This book goes a long way to restoring Margaret to the recognition she deserves.

Thank you to Pen and Sword History for my review copy