On Saturday I visited the ‘Gold: Power and Allure’ exhibition in London. The summer exhibition of the Goldsmith’s Company is well worth seeing. 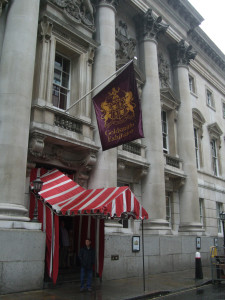 My main reason for going was the locket ring that belonged to Elizabeth I which is on public display for only the third time. However, there were also lots of other Tudor related items on view.

The 400 gold items also featured; rings containing the hair of Mary Tudor, a Queen Elizabeth I gold pendant, a pendant with a possible cameo of Mary Queen of Scots, a cross that belonged to Reginald Pole, coins from each of the Tudor reigns and coins from the Mary Rose.

The exhibition is on three floors and Elizabeth’s ring is on the third. It was amazing to see, firstly because it was worn by Elizabeth, secondly because of the workmanship involved and thirdly and most importantly because of the two portraits it contains.

I had to kneel down to get a closer look at the tiny portraits (due to the angle of the second portrait in the open ring). It is amazing how small they are. Elizabeth’s is quite clear to make out but the other portrait isn’t. The gallery attendant told me I could borrow a magnifying glass to get a closer look. This gave a slightly clearer view and I was able to make out the French hood and the hair but that was about it. Still worth seeing though!

I chatted to the attendant and he said that during the week a woman had dashed into the exhibition and asked ‘Where is the ring?’ He had to ask which ring, as there are a number on display but soon ascertained that it was Elizabeth’s ring that she wanted to see. 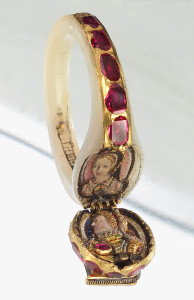 According to tradition the ring was dedicated to James I (James VI of Scotland) as evidence of the Queen’s death and given by him to the 1st Earl of Home in 1603.

The bezel in the form of a locket is set with two enamelled portrait reliefs, one of Queen Elizabeth I, the other of a lady (Anne Boleyn?)’

The ring is set with an ivory plaque under rock crystal on which has been arranged the hair of Mary Tudor, Queen of France (18 March 1496-25 June 1533). The back of the ring is engraved Mary Queen of France died 1533.

After a number of moves her body was interred at St Mary’s Church in Bury St Edmunds. However, before it was finally laid to rest her coffin was opened on 6th September 1784 and various items taken. These included cuttings of her hair which was found to be conspiculously red and more than 2 inches long. The small lock of hair in this ring was cut from it.’

Another example of a souvenir taken from Mary Tudor’s tomb.’

‘ The back is decorated with 3 pendant baroque pearls, some stones replaced c 1720. Given by Mary Queen of Scots to Thomas Howard, 4th Duke of Norfolk then by descent.’

‘Henry VII created new high quality coins which demonstrated how England saw itself as an economic force. In 1489 he introduced the sovereign.’

Pound Elizabeth I
1565, minted at the Tower of London

Coins from the Mary Rose

‘On 19th July 1545 the Mary Rose, pride of Henry VIII’s fleet, sank as she defended England from a French invasion force. She was not a treasure ship, the coinage carried on board would have been personal money carried for pay and expenses. It is not surprising that only 27 high-value gold coins were found on the ship, including these.’

You can view some of the items on display at The Jewellery Editor website.

In all I managed to spend about 20 minutes viewing the ring. I kept going back when no one was looking at it but in the end my husband had to drag me away. The exhibition runs until 28th June and as I work only 20 minutes away from Goldsmiths’ Hall, I think another visit is in order!

All italics are quotes from the exhibition

This entry was posted in Exhibitions and tagged Anne Boleyn, Elizabeth I, Exhibitions, Gold: Power and Allure, Portait Ring. Bookmark the permalink.