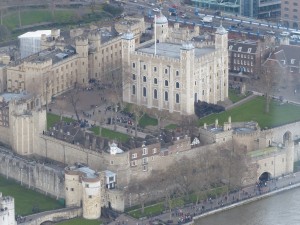 ‘The fortress would become in rapid succession her palace, her prison, her scaffold – and her tomb.’ (1)

Lady Jane Dudley arrived at the Tower of London on 10th July 1553 as Queen, on the 19th of July she became a prisoner there and on 12th February 1554, she was executed within the Tower walls and buried in the Chapel of St Peter ad Vincula. 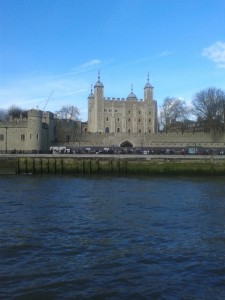 ‘The 10 of July, in the afternoone, about 3 of the clocke, lady Jane was convayed by water to the Tower of London, and there received as queene.’ (2)

Queen Jane’s reign ended on 19th July when the Privy Council declared for Mary. Julius Terentianus wrote to John Ab Ulmis on November 20th 1553 that, ‘Thus Jane was queen for only nine days, and those most turbulent ones.’ (3) 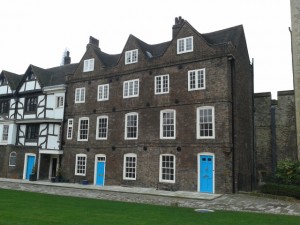 At some point the former queen was moved from the Royal apartments in the Tower to the ‘house of Nathaniel Partridge, the gentlemen – gaoler’ (4). The current house (pictured above) is a later building. 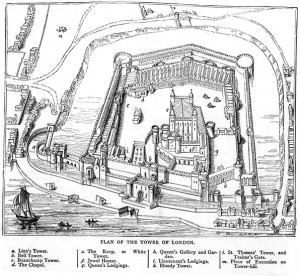 On the 29th August 1553, Rowland Lee, ‘an official at the Royal Mint’ (5) and the author of ‘The Chronicle of Queen Jane and of Two Years of Queen Mary, and Especially of the Rebellion of Sir Thomas Wyat’, dined at Nathaniel Partridge’s house where Lady Jane was being held. The author was surprised to find Jane seated at the table when he arrived and afterwards recorded their conversation in his chronicle.

‘Note, that on tuisdaie the xxixth of Auguste, I dyned at Partrige’s house with my lady Jane, being ther present, she sitting at the bordes end, Partige, his wife, Jacob my ladyes gentill woman, and hir man. She commanding Partrige and me to put on our capes, emongest our communycacion at the dyner, this was to be noted: after she had one or twice droncke to me and bad me hartellie welcome, saithe she, “The queens majesty is a merciful princes; I beseche God she may long continue, and sende his bountefull grace apon hir.” (6) 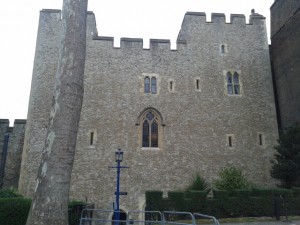 Guildford Dudley and his brothers were held in the Beauchamp Tower. A room on the first floor of the Tower contains many carvings made by prisoners. 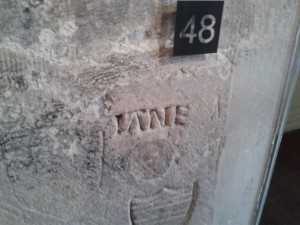 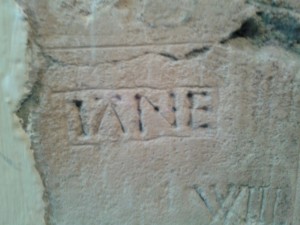 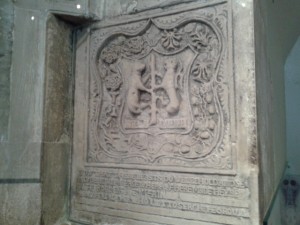 On the ground floor of the Beauchamp Tower is an exhibition which features Jane. 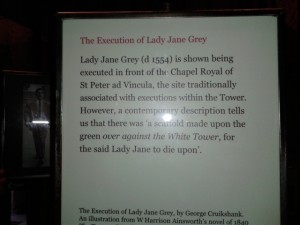 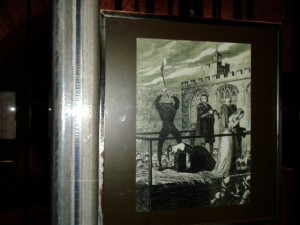 In December 1553, Lady Jane was granted permission to walk in the Queen’s garden.

‘The xviijth day, the lady Jane had the libertie of the Tower, so she might walk in the queens garden and on the hille; and the lorde Robert and lorde Gilford the liberty of the leds in the Bell Tower…’ (7)

On 12th February 1554, Lady Jane was executed on Tower Green; Guildford had been executed earlier that morning on Tower Hill.

By this tyme was ther a scaffold made upon the grene over against the White tower, for the saide lady Jane to die apon. (8)

‘Item the xij. of Februarij was beheddyd wythin the tower lady Jane that wolde a bene qwene; and hare husband whose name was Gylford Dudley at the Tower-hyll.’ (9) 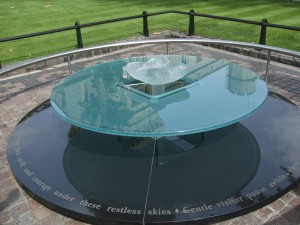 ‘Gentle visitor pause awhile : where you stand death cut away the light of many days : here jewelled names were broken from the vivid thread of life : may they rest in peace while we walk the generations around their strife and courage : under there restless skies.’ (10)

Jane and Guildford were buried in the Tower Chapel of St Peter Ad Vincula. 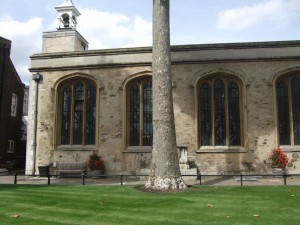 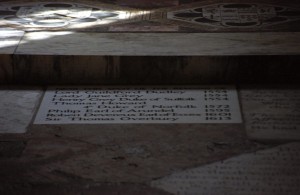